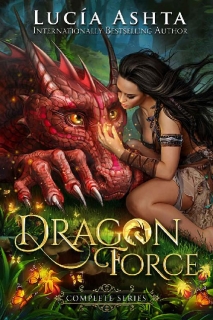 Dragon Force: The Complete Series by Lucia Ashta
English | 2020 | YA Fantasy | ePUB | 1.3 MB
Invisible when no one should be, Anira is an outcast, forced to hide from the chieftain who rules her clan with an iron fist.
He is their savior. Akin to a god. The path to their survival.
Only, he isn’t. Not by a long shot.
He is their greatest enemy, hidden within their midst. The most dangerous threat of all.
No one sees him for who he is, but her. The one whose very existence is a guaranteed death sentence, should she be discovered. Worse, she is a twin, and the chieftain has forbidden all twins. If she is revealed, her brother will die too.
But Anira is the only one who realizes who the chieftain really is.
She must decide what is more important: her own survival and that of her twin, or that of her entire people and the dragons they are sworn to protect.
When a baby dragon, left for dead, is the first to ever see her, it’s up to the two of them to do what must be done.