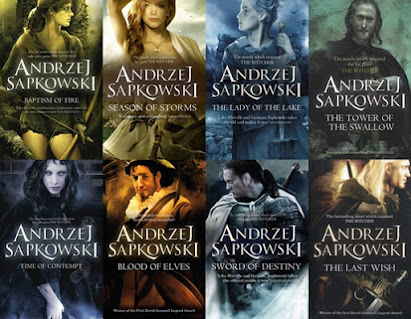 The Witcher series by Andrzej Sapkowski
ePUB | 8 Books | Fantasy
The Witcher is a fantasy series of novels and short stories written by Polish author Andrzej Sapkowski. The series revolves around the titular “witcher”, Geralt of Rivia. In Sapkowski’s works, “witchers” are beast hunters who develop supernatural abilities at a young age to battle wild beasts and monsters.
1. The Last Wish
Geralt de Rivia is a witcher. A cunning sorcerer. A merciless assassin. And a cold-blooded killer. His sole purpose: to destroy the monsters that plague the world. But not everything monstrous-looking is evil and not everything fair is good… and in every fairy tale there is a grain of truth. The international hit that inspired the video game: The Witcher.
2. Sword of Destiny
Geralt is a witcher, a man whose magic powers, enhanced by long training and a mysterious elixir, have made him a brilliant fighter and a merciless assassin. Yet he is no ordinary murderer: his targets are the multifarious monsters and vile fiends that ravage the land and attack the innocent. He roams the country seeking assignments, but gradually comes to realise that while some of his quarry are unremittingly vile, vicious grotesques, others are the victims of sin, evil or simple naivety.
3. Blood of Elves
For over a century, humans, dwarves, gnomes, and elves have lived together in relative peace. But times have changed, the uneasy peace is over, and now the races are fighting once again. The only good elf, it seems, is a dead elf.
Geralt of Rivia, the cunning assassin known as The Witcher, has been waiting for the birth of a prophesied child. This child has the power to change the world – for good, or for evil.
As the threat of war hangs over the land and the child is hunted for her extraordinary powers, it will become Geralt’s responsibility to protect them all – and the Witcher never accepts defeat.
4. The Time of Contempt
Geralt is a witcher: guardian of the innocent; protector of those in need; a defender, in dark times, against some of the most frightening creatures of myth and legend. His task, now, is to protect Ciri. A child of prophecy, she will have the power to change the world for good or for ill — but only if she lives to use it.
5. Baptism of Fire
The Wizards Guild has been shattered by a coup and, in the uproar, Geralt was seriously injured. The Witcher is supposed to be a guardian of the innocent, a protector of those in need, a defender against powerful and dangerous monsters that prey on men in dark times.
But now that dark times have fallen upon the world, Geralt is helpless until he has recovered from his injuries.
While war rages across all of the lands, the future of magic is under threat and those sorcerers who survive are determined to protect it. It’s an impossible situation in which to find one girl – Ciri, the heiress to the throne of Cintra, has vanished – until a rumor places her in the Niflgaard court, preparing to marry the Emperor.
6. The Tower of Swallows
The world has fallen into war. Ciri, the child of prophecy, has vanished. Hunted by friends and foes alike, she has taken on the guise of a petty bandit and lives free for the first time in her life. But the net around her is closing. Geralt, the Witcher, has assembled a group of allies determined to rescue her. Both sides of the war have sent brutal mercenaries to hunt her down. Her crimes have made her famous. There is only one place left to run. The tower of the swallow is waiting…
7. Lady of the Lake
After walking through the portal in the Tower of Swallows while narrowly escaping death, Ciri finds herself in a completely different world… an Elven world. She is trapped with no way out. Time does not seem to exist and there are no obvious borders or portals to cross back into her home world.
8. Season of Storms
Geralt of Rivia. A witcher whose mission is to protect ordinary people from the monsters created with magic. A mutant who has the task of killing unnatural beings. He uses a magical sign, potions and the pride of every witcher — two swords, steel and silver. But what would happen if Geralt lost his weapons?
In this standalone novel, Geralt fights, travels and loves again, Dandelion sings and flies from trouble to trouble, sorcerers are scheming … and across the whole world clouds are gathering – the season of storms is coming…